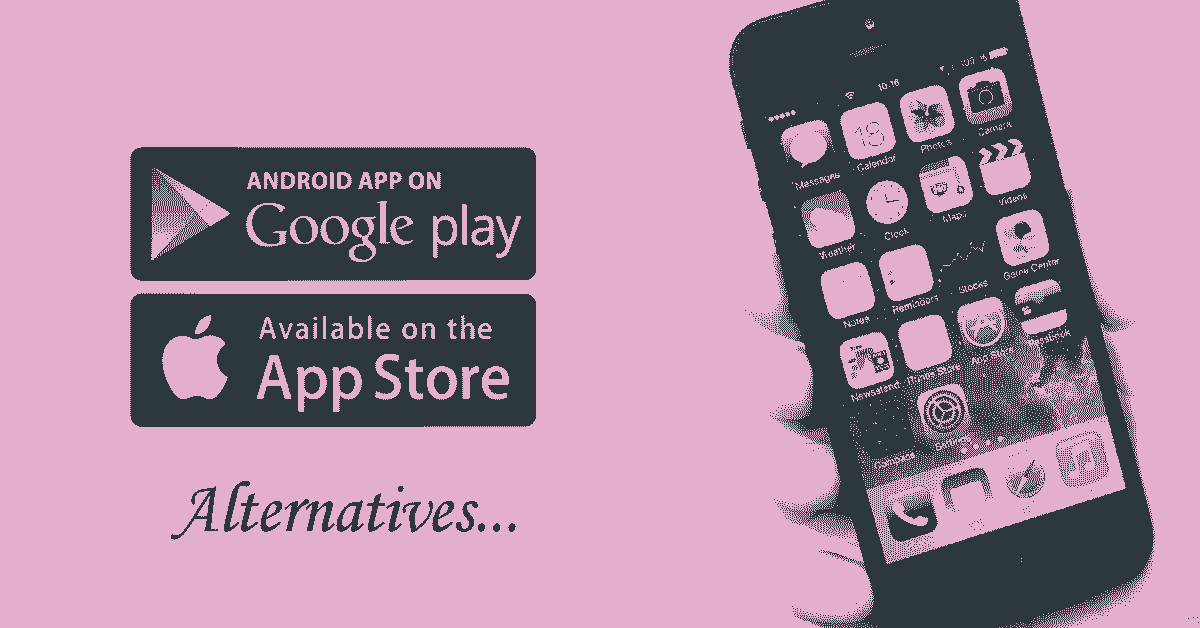 There are reliable platforms that serve as alternatives to google play store and apple store to download mobile apps.

The popularity of the Google Play and Apple Store inhibits the knowledge of the existence of their alternatives. Perhaps, people are not just interested in seeking alternatives or not sure of the reliability of the alternatives.

Notwithstanding, there are reliable alternatives to google play store and apple store that guarantee as much privacy and protection Some of these platforms are managed by some of the most popular and reputable companies in the world. Some of them are highlighted below.

The Amazon Appstore is one of the best alternatives to google play store and apple store for downloading mobile apps for android and IOS mobile devices.

There are about five hundred thousand apps available on the Amazon Appstore for download. Some of the apps on the Amazon app store are free while others cost a fee.

The Samsung Galaxy Apps is one of the most reliable alternatives to google play store and apple store. The app store is owned by Samsung, one of the biggest producers of Android devices.

For an app store owned by one of the biggest phone manufacturers in the world, expect a high level of security.

F-droid is one of the several alternatives to the Google Play store. This app store relies on donations from volunteers for its existence. What this means is that users who find interesting apps on the store to download may decide to make donations.

The app store is open-source software for android apps. That is, android developers have free access to the codes used to develop apps displayed on the platform. They can also use part of the codes of any of the apps to develop theirs. This makes it an invaluable place of resort for software app developers.

The SlideMe app store is one of the most reliable platforms to download mobile apps. The app store features majorly on mobile devices that do not have Google Play. It is used predominantly in areas where the Google Play store is not so popular.

Like the Google Play store, apps on SlideMe are subjected to reviews by users. However, the app store does not permit adult content even though it allows apps rejected by the google play store on its platform.

It is pertinent to note that advertisements are made at the bottom of the app store which sometimes puts users off. Notwithstanding, the SlideMe app store is a good place to download games.

GetJar is one of the best alternatives to google play store and apple store. It is an app store that was foundedin2004. By 2005, it started making free apps available for download.

Today, there are almost a million mobile apps available to Android users with over 3 million downloads per day. The GetJar app store allows software developers to upload their apps through a dedicated channel.

The BuildStore is another one of the most reliable alternatives to google play store and apple store. The app store allows users of iPhones and iPads to download a slightly different version of their favorite apps.

Thanks to the app store, relishing childhood memories is made easy. Users can download games such as Pokemon and Mario on their iOS devices.

The app store charges a fee before users can register their devices and download apps. They pride themselves as a viable alternative to the Apple store by accepting some of the “amazing” apps that are not accepted by the Apple store.

There are not many app stores that can serve as alternatives to google play store and apple store at the same time. The Opera Mobile store takes up this position easily because it provides apps supported by both Android and iOS devices.

Since its launch in 2011, the app store has grown in leaps and bounds. There are over 150million visitors on the app store monthly. Every year, the app store recognizes the best apps on its platform through the Opera Top App Awards. This award is voted for by users on the platform, thereby giving credibility to the winners.

There are about 200,000 apps on the app store and the majority are free for download. These apps can be found under video games, social media, e-books, and other categories.

The Google Play Store and Apple store are two of the most reliable platforms to download mobile apps. They also have more apps displayed than any of the app stores listed above. In fact, on Apple and Google Playstore, you can literally get a mobile App for almost anything -including football apps.

Notwithstanding, these other app stores are good alternatives to google play store and apple store as they offer a wide range of apps.

Across all the platforms listed, some apps do not cost a fee and there are those which do. One thing is however certain: users can trust them for the best mobile apps depending on the need.