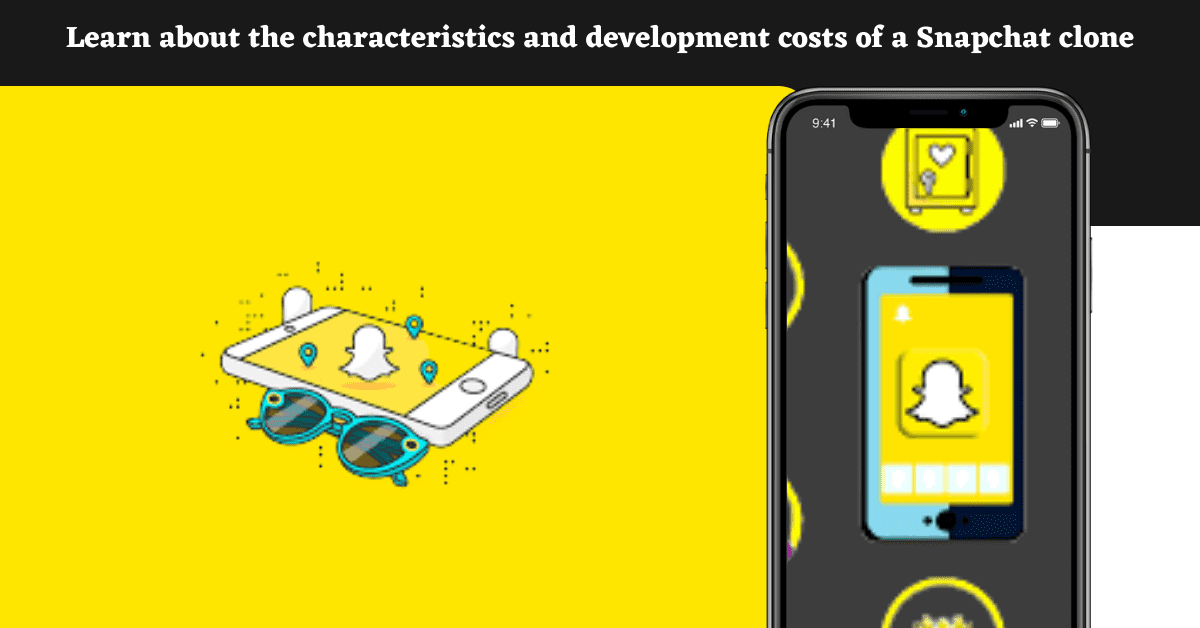 In a very short amount of time, Snapchat has positioned itself as the most used social networking and messaging app, finding out the secret behind viral applications. As a result, hundreds of entrepreneurs have been motivated to learn how to build apps like Snapchat and invest in a social media mobile app development business that knows the challenges of producing messaging apps like Snapchat.

The objective that has caused a surge in Snapchat competitors, including some hotshot startups, is to follow Snapchat’s development trajectory and benefit from the 191 million daily active users.

The app’s feature set is the primary reason why marketers are still drawn to Snapchat-like apps.

1. Snapchat was the first social media network to provide the feature of vanishing messages, and the concept immediately gained popularity. Aside from the vanishing material, the introduction of augmented reality (AR) to assist in the customization of face characteristics was also promoted immediately after Snapchat.

2. One of the second most important causes fuelling the emergence of several firms that have been inspired by the brand and are ready to build a Snapchat Clone Script is the non-complex Snapchat app technological stack. The low complexity of the technological stack influences app development expenses, just as it does for apps other than social messaging apps.

Snapchat users cannot log in using their social networking accounts. Their initial reason was straightforward: they did not want to add their parents to their snap friend list.

If you want to adopt the same process for your messaging app development, before login into Snapchat, a user must first give their name, birthday, phone number, and then pick a nickname. After entering all of this information, they will receive a confirmation number on their linked phone, completing the registration process.

When it comes to making new friends on applications like Snapchat, users often have one of four options:

The next feature that impacts how much Snapchat charges is instant messaging. Like many other prominent social networking sites, this platform allows for real-time discussion. To allow chatting and push notifications in your Snapchat clone program, utilize the XMPP and HTTP + Push Notification technologies.

In addition to these, you may request that your mobile app development company include Erlang language (used by WeChat and Whatsapp), YAWS server, XMPP, and Mnesia DB in your Snapchat technological stack list for development.

Among the most important considerations in picking the answer to the question, “How much does it cost to establish an app like Snapchat?” is the vanishing messages. It is how the Disappearing Messages work:

Through your Snapchat-like software, users should be able to record and transmit 10-second films to other users. It’s ideal for creating and sharing response gifs. You may also use this feature to send audio messages to another user.

Snapchat’s voice and audio call functionality separate it from Whatsapp and Facebook. Time to Grow: It takes about a month to establish both the call and the note-sending alternatives.

Stickers have turned into an important part of every social networking platform. They are particularly useful for keeping app users interested and satisfied.

There are a variety of sticker extensions available for both Android and Apple, and incorporating one into your Snapchat clone app can take anywhere from 10 to 20 hours.

Snapchat is what it is today, thanks to its lenses. Snapchat users are glued to the social media app. The reason, it allows them to paste different looks on their faces and change their voices.

The aspect is so tightly tied to Snapchat’s identity that answering the question “How much does Snapchat cost?” without discussing lenses.

You may use the Mirror Reality SDK to include the same facial recognition functionality into your program, which is a less expensive alternative to constructing a full-fledged AR facility. You may even create your AR animation with Snapchat’s Lens Studio tool.

In terms of Stories, Instagram and Snapchat are quite similar. Users may use the stories function to broadcast anything publicly on the app, remaining live for 24 hours.

The brand added a new element to its narrative feature called Live Story. You may also use Wowza Media Server (which Periscope uses) to add the ability to generate live real-time video. That can then be delivered over a content delivery network.

It takes between 100 and 200 hours to develop narrative and live story capabilities for the Snapchat clone app.

In this section, Snapchat users will often find material supplied by Snapchat sponsors. As the main story area, Discover’s stories are only available for 24 hours.

Users may use this feature to paste custom geographic templates onto their photographs. To incorporate this feature in your Snapchat clone app, you’ll need to hire a mobile app development company knowledgeable about the Geocoding development process.

Now that we’ve examined the technological stack of a Snapchat clone app, as well as the features and development hours required, let’s move on to the final and most essential section of the article: how much does it cost to build an app like Snapchat?

How Much Does Creating a Snapchat-like App Cost?

This section contains your answer to the question, “How much did Snapchat cost to make?” The table below shows how long it takes to develop/integrate various parts of the Snapchat clone app.

Considering the development and design time, the answer to how much it costs to make an app like Snapchat is likely to be in the $45,000 to $60,000 region. However, it is only a rough approximation. Several factors might impact the monetary answer to the question, “How much does it cost to build a Snapchat app?”

It’s time to apply your knowledge of not only the Snapchat clone app market potential but also the answer to how to create an app like Snapchat, as well as a rough cost estimate, to good use.

It’s time to put your knowledge of creating a Snapchat clone app to use.

For this reason, you should contact our team of mobile app development professionals to get your Snapchat clone app produced.